This was a big night for actress Emma Stone, who picked up the ‘Best Actress in a Musical or Comedy’ award for her role in La La Land. She also triumphed in the style stakes at this year’s Golden Globes, rocking an off-white, star-spangled Valentino dress, coupled with just a diamond collar necklace.

If anyone showed that they can use fashion for marketing purposes, a valuable skill to have if you want to become a model, it was Natalie Portman. The star channelled her title role in Jackie, a biopic on Jackie Kennedy, with a canary yellow, floor-length embellished Prada gown that just screamed 1960s!

US News outlet Today named Evan Rachel Wood, the star of Westworld, one of its best dressed celebs of the 2017 Golden Globes. Instead of wearing a dress, Evan donned a custom Altuzarra silk pantsuit for the red carpet. Teamed with styled, short-blonde locks, she was the ultimate fashionable feminist!

Nicole Kidman was definitely one of the standouts this year. On the red carpet, the iconic actress showcased a flirty, silver Alexander McQueen frock, complete with intricate silver sequin embroidery and a frothy silk train. Paired with matching gloves, this was total old school Hollywood glamour!

Drew Barrymore, who rose to fame as a child in Steven Spielberg’s ET, is looking better than ever. Deciding to flaunt her figure at the Golden Globes, Drew worked a glamourous 1920s-esuqe Monique Lhuillier sheath gown with cut-out shoulder detail, which is really on trend and billowing sleeves.

As she becomes a big star, Pitch Perfect actress Anna Kendrick just keeps showing us that she knows what to wear on a red carpet. Displaying her style credentials once again, at this ceremony Anna chose an asymmetrical-shouldered, gun metal pleated dress designed by Vionnet, which was pure class. 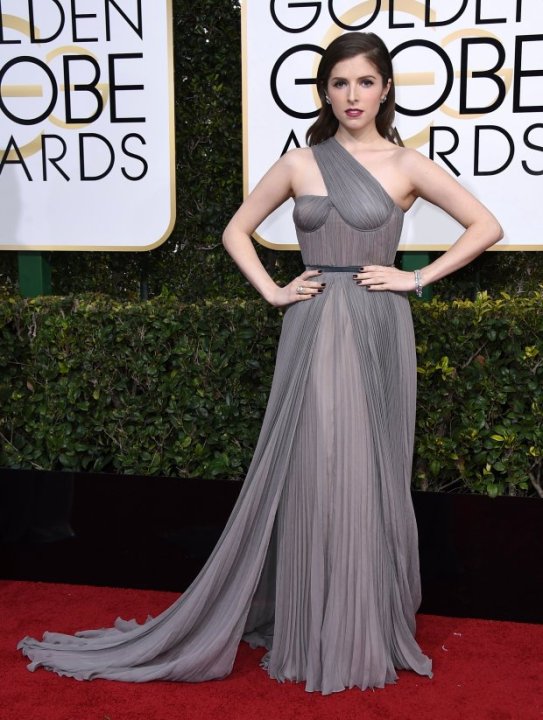 You don’t become one of the biggest supermodels of all time, like Naomi Campbell, without learning how to shine at an awards ceremony. Naomi rose to the occasion again at the 2017 Golden Globes, with a pleated, one-shouldered, deconstructed white and black Versace gown that wowed everyone!